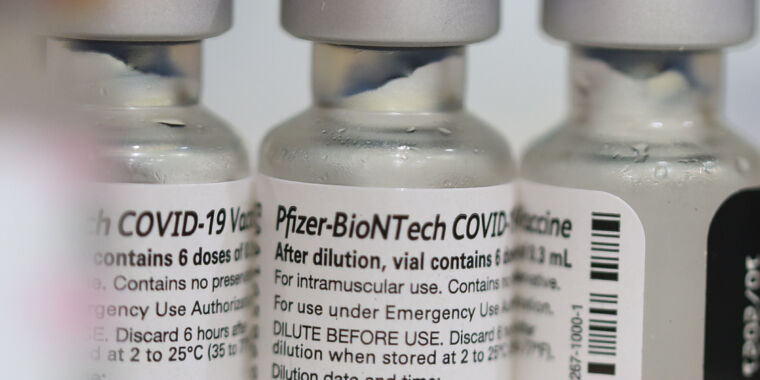 Pfizer and BioNTech will request authorization from the US Food and Drug Administration this week for their three-dose COVID-19 vaccine for children ages 6 months to under 5 years, the companies announced this morning.

Top-line clinical trial results indicate that the vaccine series is safe and produces a strong immune response against the pandemic virus, according to the companies.

“The study suggests that a low 3-[microgram] dose of our vaccine…  provides young children with a high level of protection against the recent COVID-19 strains,” BioNTech CEO Ugur Sahin said in a statement.

The trial involved 1,678 children who were given two doses of the vaccine 21 days apart and then a third dose at least two months after the second dose.

A month after the third dose, researchers looked at SARS-CoV-2 antibody levels in the children and found that both the 6- to 24-month-old infants and the 2- to under 5-year-old children produced similar antibody levels as seen in teens and young adults, 16- to 25-year-olds.

The companies also noted that a descriptive analysis based on 10 symptomatic COVID-19 cases identified in the trial suggests that the three doses are 80 percent effective against an omicron infection. However, the trial was designed to only assess vaccine efficacy after at least 21 cases accrued in the trial. The companies said they will continue to collect data from the trial, but they expect to complete their authorization request to the FDA this week.

The announcement marks the latest turn in a regulatory rollercoaster ride for parents who have anxiously awaited authorization of vaccines for the youngest children. In December, Pfizer and BioNTech announced that just two doses of their 3-microgram vaccine in children age 2 to under 5 did not produce similar antibody levels to those seen in older ages, thus failing the trial. At that point, the companies said they would add a third dose.

Then, amid the omicron wave in January, the FDA, Pfizer, and BioNTech reconsidered the possibility that a two-dose vaccine could earn authorization, hinting at positive efficacy data against omicron. But by mid-February, they collectively abandoned the plan again. Additional data from the omicron wave convinced them to wait for data on the third dose, the companies and regulator said.

In late April, Moderna announced that two doses of its 25-microgram vaccine did produce strong antibody levels in children under the age of six. Preliminary efficacy data suggested that the two doses were 44 percent effective against omicron in children 6 months to 2 years, and 37.5 percent effective in those 2 years to under 6 years. The company added that it was also requesting FDA authorization, raising parents’ hopes that a much-desired vaccine could be available as early as sometime in May.

But those hopes were soon dashed by reports that the FDA was considering delaying the review of Moderna’s vaccine until it had data from Pfizer and BioNTech’s third dose. That would put an authorization no earlier than sometime in June. The report sparked outrage, and the FDA went on the defense, saying it was reviewing the data as quickly as possible.

In an announcement following Pfizer and BioNTech’s press release on Monday, the FDA said it revised the schedule for its advisory committee to review the requests. On June 15, it will convene its advisers to review both Moderna’s vaccine for children 6 months through 5 years and Pfizer-BioNTech’s three doses for 6 months through 4 years of age.

“We know parents are anxious for us to determine if these vaccines are safe & effective,” the FDA said on Twitter. “In light of the disclosure by Pfizer re: their data & anticipated dates for submission, we believe that we will complete review of both EUA requests within days of one another. We are working as quickly as possible to carefully review all the data.”